Digital spin locks like the Kaba Mas X-09 and X-10 are very common for high security applications like vault doors. US General Services Administration approval means that they are nearly ubiquitous in securing government filing cabinets that contain documents that are classified secret, as well as securing the doors to laboratories in which secret code is written and stored. Strolling through the hallways of any Department of Defense facility or government contractor’s office, one is likely to see many of these on the doors: 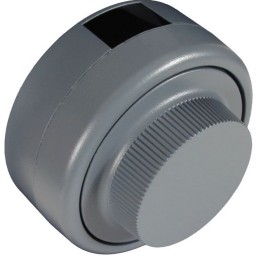 These types of locks are very sophisticated: they are self-powered by rotating the dial and they have a digital printout on the top of the code as it is being entered. Security features to thwart automated brute force attack include random jumps in the numbers as the dial is being turned, algorithms for detecting “non-human” rotations of the dial, and long timeouts for successive failed attempts. These types of locks are usually configured to accept a six-digit code that is input as a sequence of three numbers from 0 to 99. That means there are $math$10^6 = 100^3 = 1,000,000$math$ possible combinations. With a four-minute timeout, brute forcing all of the combinations would take almost eight years!

Humans are generally bad at remembering long sequences of numbers, and in most facilities the combinations to these locks are changed frequently. A single employee might have to memorize dozens of different combinations (one for each safe, door, etc.). Therefore, as a mnemonic, the security officers who set the codes often use six-letter words which are translated into codes using the mapping from a phone keypad. In fact, one will almost always see a magnet or sticker like this right next to the lock:

With a four-minute timeout, brute forcing all of the combinations would take almost eight years 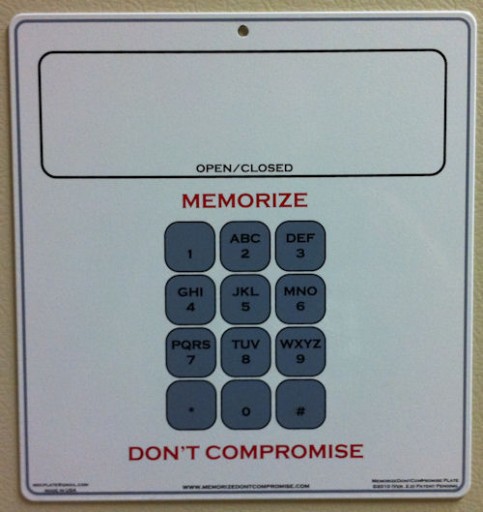 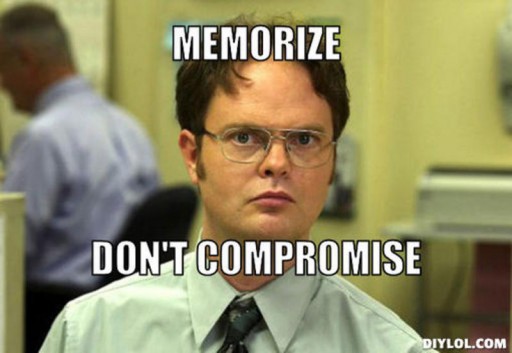 Entire companies are dedicated to selling these magnets!

And therein lies a vulnerability. First of all, using a phone dial pad for the mapping from letters to numbers means that the numbers zero and one will never be used! This means the number of potential codes to test has been decreased from one million to $math$8^6 = 262,144$math$. That’s a decrease of almost 75%!  But we can do even better.

Next, let’s assume that the code word is a six-letter English word that occurs in the dictionary. Looking at /usr/share/dict/words, there are only 17,706 six-letter English words that have direct mappings using a phone keypad. That’s much lower than the 262,144 possible codes without zero and one, which means that we have reduced the number of possible codes to brute force by over 98% from the original! For example, the code 55-57-59 doesn’t appear to correspond to any words in the dictionary. That’s likely because almost all words need at least one vowel, and the phone keys 5, 7, and 9 don’t provide any vowels. Furthermore, many of those 17,706 words actually map to the same code. For example, the words “DOSAGE“, “ENRAGE“, “FORAGE“, and “FORBID” all map to the code 36-72-43. If we just count the number of distinct codes generated by those six-letter English words, we get only 14,684, a reduction of almost 99%! With a four-minute failure timeout, brute forcing those 14,684 codes would only take about forty days.

If we just count the number of distinct codes generated by those six-letter English words…brute forcing those 14,684 codes would only take about forty days.

Not all letters occur in English words with the same frequency; you’re much more likely to find the letter ‘e’ in a randomly chosen word than the letter ‘x’.  For example, almost 10% of the six-letter English words in the dictionary end in the code “37“, just like in our example word “HACKER“.  Therefore, if we cleverly order our brute force approach to try codes that occur most frequently in English words, then we can increase our chances of cracking the code quicker.

We sorted all of the 14,684 distinct codes in decreasing order according to the number of words that map to that code.  If a code word is chosen uniformly from the set of all six-letter English words, then this ordering will maximize our chances of cracking the code quickest.  In fact, after fewer than 250 attempts, we will have cracked the code with about 5% probability. In other words, with only about half a day of access to the lock, a brute force attempt using this ordering will have a 5% chance of success.  In contrast, if the lock’s code were instead set using a randomly generated six-digit number, it would require on average 50,000 attempts (~5 months) to crack it with 5% probability.  On the other hand, if the code were set from a six-letter English word using a phone keypad mapping, the lock can be cracked with 50% probability after about 16 days.

Codes are not usually changed on a month-to-month frequency, so an adversary with intermittent access to the lock (e.g., after hours) could quite conceivably crack it before the code were changed.

If there exists an additional vulnerability that allows the attacker to detect whether each successive two-digit subcode is correct before entering the next two-digit subcode, then the expected value for the length of time required to crack the code is on the order of minutes.

So what can we do about it? The most obvious solution is to simply choose codes randomly from the set of all possible one million 6-digit numbers. If we really do want to have a mnemonic, though, we could do a lot better by using a letter-to-number mapping that makes use of zeros and ones, and also produces a relatively even distribution of codes from English words.  Here is one such example of a mapping:

It’s not necessarily the best one, though.  Finding the optimal mapping—the one that ensures a uniform distribution across all six-digit codes for six-letter English dictionary words—is actually an instance of the multiple knapsack problem (a variant known as the multiple subset sum problem), is therefore NP-Complete, and likely intractable for problems even as “small” as this one.

Let $math$L = \{a, b, \ldots, z\}$math$ be the set of letters in the alphabet and let $math$f : L \rightarrow \mathbb{N}$math$ be a function mapping letters to their frequency among six-letter words in the dictionary.  Then we can relax the problem to the minimization of the mean squared error over the summed frequencies of the letters mapped to each number.  Find a function $math$t : L \rightarrow \{0, \ldots, 9\}$math$ that maps letters to numbers such that $equation$\frac{1}{10}\sum_{i=0}^9 \left(sum_{\ell \in t^{-1}(i)} \left(f(\ell) – \frac{\sum_{\ell \in L} f(\ell)}{10}\right)\right)^2$equation$ is minimized. The total number of legal mappings, $math$t$math$, is $math$10^{26} = 100$math$ million billion billion.  With that said, the example mapping above will be at least a million billion billion times more secure than using a phone keypad mapping!

The moral of the story here isn’t that these locks are inherently vulnerable; if used properly, they are in fact incredibly secure. The takeaway is that these locks are only as secure as the codes humans choose to assign to them. Using a phone keypad mapping on six-letter English dictionary words is the physical security equivalent of a website’s arbitrarily limiting passwords to eight characters.